Unfortunately, app revenue stats are not easy to come by. Seesmic’s founder Loic Le Meur wrote a blog post in 2010 titled “How much can you really make developing mobile apps” that suggested that, despite 5 billion app downloads and $1.5 billion in Apple App Store revenues, the average paid app probably makes just $500 for its creators. And by “make,” I don’t mean profit, since apps often cost $20,000 or $30,000, just as a starting point. 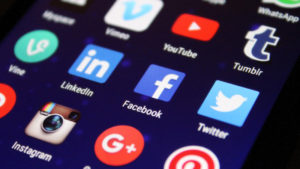 An app has to have some cache to get people to download it in the first place – and extra oomph for them to even shell out a dollar, or two dollars, or ten. Free apps still need something sticky to make people open and use it time and time again.

Working in the nonprofit arena, I also receive regular inquiries from developers wanting to create apps for the Make-A-Wish Foundation that feature us as a cause marketing beneficiary. Often those proposals hinge on using our name to promote their app. Usually it’s pretty obvious who benefits more from that association. However, we’re always open to the possibilities, so we have a list of questions that we ask prospective app developers to help us gauge whether there is any there-there. Some of these include:

Are we missing any big questions that we should be asking?

There’s a lot more to mobile than just apps

After the Red Cross raised a bazillion dollars for Haiti relief through mobile donations, charities started going wild about the fundraising potential using handhelds. And mobile vendors were quick to promote mobile donation widgets and texting options as the hot new must-have across every channel. Here’s the rub – text-to-donate only fits under certain conditions and it can detract if you don’t apply it in the right manner.

Say your charity has an average website donation of $75. Mobile text-to-give programs currently only allow for $5 and $10 donations, with a $25 option coming soon. So does adding a $5 or $10 mobile donation widget make sense for your website? Probably not – but it might make sense on third-party websites.

Lots of charities are offering introducing mobile donation options at their events. Not a bad idea, if done right. Most are not. Just because people have a phone doesn’t make them inclined to donate, even such a small amount.

The Make-A-Wish national office and several chapters across the country have and continue to offer mobile donation options as part of larger fundraising efforts. We’ve found that, when you’re not conducting a mobile campaign related to addressing high-profile disasters, the most successful text-to-donate campaigns involve as many of the following conditions as possible:

We learned a valuable lesson after an attempt to raise money at a rodeo event fell flat, and adopted a new mantra: “Cowboys don’t text.”

Charities can offer donors, supporters, fans, and website visitors the opportunity to subscribe to receive regular updates, news, promotional opportunities, or time-sensitive and topic-specific content of their choice. SMS texting is cheap, fast, and still largely unexplored territory for nonprofits. 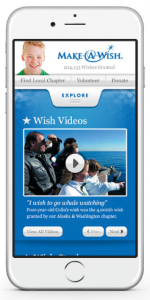 While the lion’s share of questions and discussions revolved around the possibility of Make-A-Wish apps, the analytics were revealing – the percentage of our website traffic coming from mobile handhelds had increased to upwards of 10 percent, double that of just months earlier. So it was clear that our first priority was to offer those site visitors a mobile optimized experience. In early April, 2011, we launched our first mobile website – a streamlined version of our traditional website tailored for mobile, complete with popular mission-centric content upfront, mobile optimized forms, a mobile optimized donation flow, social connection and sharing options, and a clear, consistent navigation architecture.

2d Barcodes have been hot in Europe and Asia for quite awhile now, but they are starting to gain traction in the United States too. There is no leading platform in this space yet, although QR codes, JagTags, and Microsoft Tags are among the top players. They each have their benefits and drawbacks. We tested JagTags in conjunction with our 2010 holiday campaign, Season of Wishes. We embedded them in print ads and when someone snapped a picture, using a smartphone or basic cell phone, and texted it to the number indicated, they received a campaign video on their phone. The results were lackluster. We now are testing QR codes in conjunction with seasonal campaign displays, in our annual report, in ads, and in sponsor materials. We even got one in Times Square in April as part of our World Wish Day campaign (see the bottom corners of the side panels). 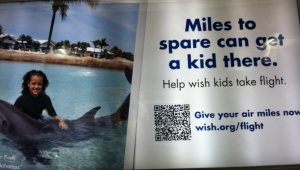 The most interesting possibilities for 2d barcodes, that we plan to test soon, are related to point-of-impulse and point-of-purchase locations. Imagine standing at baggage claim, waiting for your luggage and seeing an airport duratran ad for the Make-A-Wish Foundation. It features a mission-centric message about the need for miles donations to grant wishes. Finally, the ad would include a barcode that you could scan and be taken to a mobile optimized page where you can donate frequent flier miles to help grant wishes. Gratuitous plug: Did you know that when you donate your frequent flier miles to the Foundation, they never expire?

You can imagine all sorts of possibilities for other advertising, marketing, fundraising, educational, and promotional campaigns. You also can add some design and branding flair to your QR codes, which we plan to start doing soon.

Of course, there are lots of easy mobile advertising opportunities out there for those who either:

Foursquare, Facebook Places, Gowalla, Scvngr all offer interesting location-based social connection, reward, incentive, and loyalty opportunities. These may be a natural fit for some nonprofits who stand to benefit from foot traffic – whether volunteers at a soup kitchen or customers of a charity thrift shop – but for most, check-in programs likely are a better fit for sponsor fundraising campaigns.

There’s always something new on the horizon. I think one of the next big things for charities will be the capability of handhelds to be used as mobile wallets. When cell phones replace or become the equivalent of credit cards, it opens up a whole new world of possibilities for charities. It takes away the challenges associated with text-to-donate programs.

What big possibilities did I miss? What else are you seeing or hoping for? And if you are using mobile in some or all of these ways, how are you measuring it?