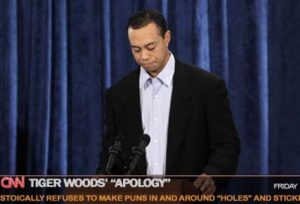 Tiger Woods just finished delivering his apology statement, asking for forgiveness for his infidelities and letting down his family and fans. Generally, the content of the speech was good. He apologized thoroughly and took responsibility for his actions. He admitted fault and presented steps he is taking to reclaim his discipline and put his personal recovery above his professional career. He praised and protected his family and humbled himself.

But the speech was not as strong as his golf game. Here are the areas where it could have been stronger:
1. Tiger Woods is known for being extremely media savvy and very controlled, even without prepared statements. In press conferences and interviews, he comes across as confident and comfortable. However, he sounds much less authentic reading from a tightly scripted speech.
2. Tiger’s speech should have been about complete contrition and acceptance of blame. Totally. Completely. Instead, Tiger switched from the soft, humble tone and aggressively attacked and antagonized the media for following his family everywhere they go and demanding that they leave his family alone. Yes, it is horrible that paparazzi hound his wife, kids, and mother. Everyone agrees with that. But in throwing darts at the media, he went from apologetic to accusatory. In crisis management, trying to spread blame is a horrible strategy. Own it. Take responsibility. Share your plan for doing everything you can to ensure it never happens again. Period.
3. I was surprised that he didn’t apologize to his mistresses. Yes, I know some might not agree and that many people blame the person a spouse cheats with more than the spouse – which I find mystifying – but those women were victims too. Tiger leveraged his power and influence to woo them. He lied to them. He used them and disposed of them as though they were worthless and only there for his entertainment.
4. After finishing his statement, Tiger hugged those sitting in the front row in the room, including his mom. This was a very strange ending and it looked and felt staged. News reports indicated that Elin refused to join him at the event, to her credit. So it just seemed like Tiger felt the need to show that he still has support from friends and family. It’s probably not a big deal, but I think it would have been better if he just walked out of the room.
5. His first public statement should have come way earlier. Waiting this long just reinforces the perception that everything he does is controlled and calculated.
Having said all that, I think the speech was a good step toward salvaging his reputation. The American public has shown time and time again that the only thing we love more than tearing down a celebrity, is seeing him/her rise from the ashes like a Phoenix, cleansed and reborn as a new and better person. Tiger has that chance. Now we just have to see what he does with it.